Animals in my house...

No, nothing so prosaic as a dog or a cat of some fish in a tank. Last night I spent much time chasing a tree frog around my study, and through the forest of wires and cords under the desk, even across the keyboard of my Mac...

This thing has legs on it like a high jumper and can leave me standing flat-footed any time. It also has suckered toes that enable it to go straight up vertical walls and windows. In the end, I gave up. Twenty-four hours later I have finally managed to shut it in the bathroom with the window open, in the faint hope that it will actually leave.

Earlier today I was sitting in the lounge room when I heard what sounded like a dried leaf being hustled by a wind along the brick-paving outside. Only there wasn't a wind. I stood up, just in time to see a treeshrew* hauling a large, very dry leaf from the guava tree over the doorstep into the lounge room, which struck me as a strange thing for it to be doing.

Treeshrews are hysterical little creatures that live in a heightened state of terror, so he shot off in a blur of fur the moment I moved. (Which is why I have never managed to get a decent photo of one.)

It wasn't until later that I discovered she must have been leaf-moving for quite some time because the bottom shelf of my bookcase had a stash of dry leaves hidden behind the books... Just as well I found out before she gave birth.

(*that's the misnamed creature that doesn't live in trees {at least ours don't} and isn't a shrew, or even a rodent of any kind. It looks a bit like a slim squirrel with a pointed face)
Posted by Glenda Larke at 8:27 pm 3 comments:

From a different perspective...


All too often, the only fantasy we read is that written by white Westerners with a Christian or Jewish religous/cultural background. It is therefore a joy to read the occasional book, written in English, that taps into another culture, penned by someone who has more than a touristy knowledge of it.

I'm white and Western, but I have lived 80% of my (long!) adult life in Muslim and Asian or African societies, married to someone who is neither white nor western nor Christian. Which is one of the reasons I try to tap into this experience in my world building. Certainly, I will be doing this in my new trilogy, and the title of the first book, "The Lascar's Dagger" gives a hint of this. There's even a possibility that somewhere in my nuclear-scientist husband's ancestry, there was a lascar... My husband was after all, born in a place which was once one of the world's great ports (Malacca), and his lineage originates from Muslim Aceh in Sumatra.

But I digress. This blog post is not about me, but to point in the direction of another writer, American-born, but of Arab descent, who has also tapped into his non-white, non-western, non-Christian cultural background with his first novel.

His name is Saladin Ahmed. And his first book is called "Throne of the Crescent Moon".

"The Crescent Moon Kingdoms, land of djenn and ghuls, holy warriors and heretics, Khalifs and killers, is at the boiling point of a power struggle between the iron-fisted Khalif and the mysterious master thief known as the Falcon Prince. In the midst of this brewing rebellion a series of brutal supernatural murders strikes at the heart of the Kingdoms. It is up to a handful of heroes to learn the truth behind these killings...."


His blog is here. Scroll down to read one of his short stories.

If you want to buy the throne of the crescent Moon, you can do it best from Saladin's website here.
Posted by Glenda Larke at 1:02 pm 4 comments:

Email ThisBlogThis!Share to TwitterShare to FacebookShare to Pinterest
Labels: news, Saladin Ahmed, The Throne of the Crescent Moon 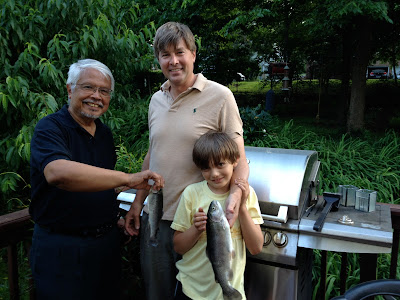 As some of you will know, my husband likes fishing and prides himself on his skills. But sometimes he loses out to the small fry...in this case, to his grandson.
Taken last month in Virginia.
Posted by Glenda Larke at 9:49 am 1 comment:

Email ThisBlogThis!Share to TwitterShare to FacebookShare to Pinterest
Labels: family

Another cover, another cloak

Every now and then I find something new on the internet that interests me.
Like a new cover for one of my books.


I totally adore this one.
This is I assume Ligea.
The book is the Mirage Makers (Der Bund der Illusionisten)
Book 2: The Shadow of Tyr -- or in this case Deceptive Light
Translated by Suzanne Gerold. Unfortunately I don't know who the cover artist is...

Book one comes out, according to Amazon, In September this year, and book two in February.
Posted by Glenda Larke at 8:57 am 5 comments: