For my dad, who never wanted to go to war

Today is Anzac Day. My dad was nearly an Anzac. He was part of the 1st AIF, sent to reinforce the troops at Gallipoli. They landed first in Egypt, but by then, the withdrawal was decided upon and his unit was sent to France instead.


There, his job was to drive mule trains of munitions to the front. He was at the Battle of Ypres. Whatever he saw, he never mentioned. After the war, it was almost a year before he was home again, even though he was not regular army. There were no ships to bring back the non-wounded... 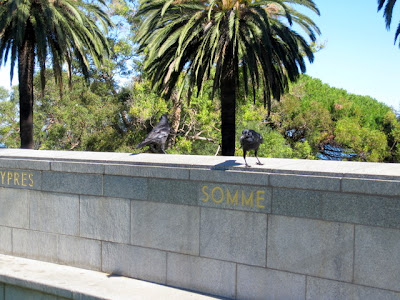 This photo I took at the War Memorial in King's Park Western Australia. A couple of ravens are standing on the wall contemplating the names of two horrendous slaughter grounds for young men: Ypres and the Somme.

And we still haven't learned a thing.

Most authors these days use beta readers, generous folk who are prepared to read an unedited book in manuscript form and give their comments, all aimed at making it better.

My friend and beta reader, Donna Hanson, is interviewing various authors about this process.

You can see her blog here.

And my interview answers here.
Posted by Glenda Larke at 2:24 pm No comments:

I have just been killing myself laughing at the comments over at this: A Forum of Ice and Fire

I shan't comment on being called a "girl" (as I think the poster of the topic actually meant women) ...but I am wondering what planet some of those leaving comments live on.


About half the fanmail I get comes from women.
Leaving aside paranormal urban fantasy such as Twilight, with its female teenage following, I know just as many female readers of epic fantasy as I know men readers.

I myself - over the past year or so - have read male writers such as Peter V. Brett, Patrick Rothfuss, Robert V.S. Reddick, M.D. Lachlan, Adrian Tchaikosvsky, Ben Aaronovitch, Brent Weeks, Joe Abercrombie, Tad Williams and Paul Hoffman. And of course, I read George R.R.Martin. And a stack of women fantasy writers as well.

My closest friend who lives around here reads the same books I do. And you know what? Our respective husbands don't read fantasy at all. Ever.

However, I imagine many of those posting on the site will just say in answer: "Ah, then you're the exception."

So maybe I will ask...do you think female fantasy writers don't like fantasy? (And once again, I'm not talking urban or  romantic fantasy of the kind that male readers largely seem to dodge.)


Try telling the following people they don't like fantasy and see how far you get:
Kate Elliott.  Jennifer Fallon.  Alma Alexander.
Alison Goodman. Robin Hobb.  N.K.Jemisin.
J.K.Rowling. Martha Wells. Margo Lanagan.
Julian May.  Rowena Corey Daniels. Michelle West.
Trudi Canavan.  Mary Victoria.  Jo Anderton.
Lois Mcmaster Bujold. Karen Miller. Patricia Wrede.
Fiona McIntosh.  Tansy Raynor Roberts.
Kate Forsyth.  Celia Friedman.  Katherine Kerr.
Jennifer Roberson.  Pamela Freeman.  Carol Berg.
Kim Westwood.  Sara Douglass.  Lynn Flewelling.
And that's just a start -- all the names that popped into my head in the last few minutes. I am sure if I spent half an hour thinking, I could put up the names of 100 women writers who write the large fantasy canvas. And I wouldn't mind betting that everyone of them LOVES epic fantasy and reads a great deal of it.

And I'd love to ask everyone of the writers mentioned what proportion of their fanmail is from female readers!
Posted by Glenda Larke at 8:15 pm 13 comments:

Email ThisBlogThis!Share to TwitterShare to FacebookShare to Pinterest
Labels: readers

So I'm trying to work in my den, and in walks a neighbour's cat. I shoo it out.
And some time later in walks another cat. I shoo that one out.
And then I become aware of mysterious noises. Soft thuds and rattles. So I think: cat.
Every time I leave my den to investigate I can't see anything. Until, eventually, I realise the garden is being bombed ... by honey guavas, hundreds of them, falling from the sky, rattling through the leaves and thudding to the ground like pink grenades: 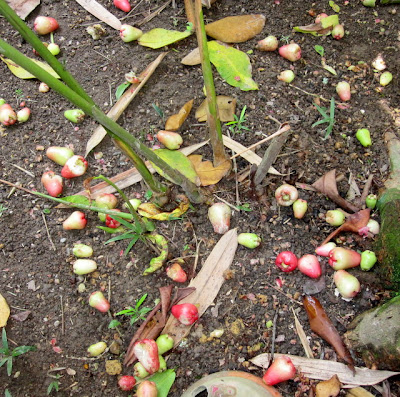 And as you see, some of them are half eaten. Definitely not cats to blame, then. 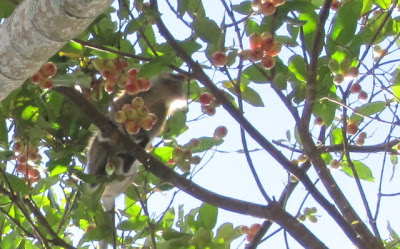 And here is one of the culprits: a long-tailed macaque. There were two of them, one with a very young  baby. And the rain of guavas continued until they spotted me and my camera. Oh, and they were aided and abetted in their theft by a grey-bellied squirrel...

OK, back to work.

From our Orchid Pergola 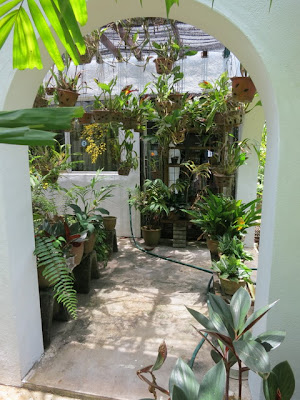 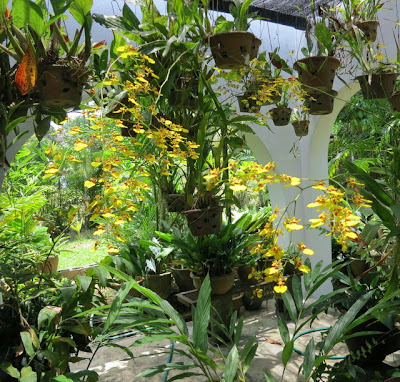 Husband was trying to work in his study, but was distracted by the view of his orchard garden and asked me to take these photos... 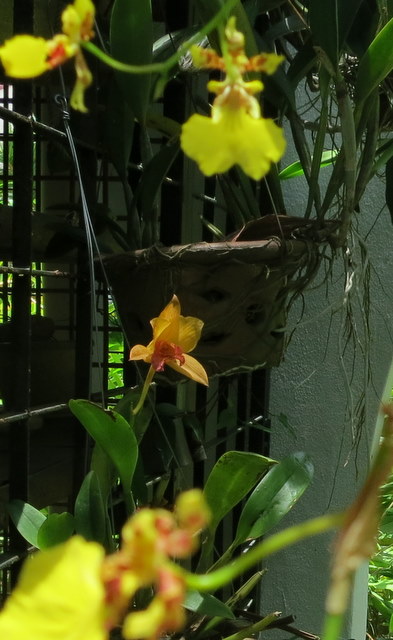 The house is still unsold, by the way.
info@glendalarke.com
Posted by Glenda Larke at 1:54 pm 2 comments: