I intend to drop by Swancon 2013 in Perth on Saturday or (and?) Sunday next.

If you see me around, please feel free to come and say hi! Look forward to seeing old friends, making new friends, and chatting to readers and writers.

As I will only have day membership, I won't be on any of the programmes.
Posted by Glenda Larke at 9:36 pm 3 comments:

The poignancy of goodbye

As most readers of this blog know, I am relocating to Australia. After Wednesday I won't be living in Malaysia on a permanent basis. Which means saying goodbye to much that has meant a lot to me over very many years.

I came to Malaysia in 1970, and here it is forty-three years further on and I have no idea where the time has flown. There is so much that I will miss, and of course I expect to be back often, especially as my husband is remaining behind to complete his contract and the selling of our house.

It seems appropriate that on my last weekend here I should attend a family gathering, in which a close relative sealed her engagement to a longtime friend. Over the years, attending such functions -- and recognising the beauty of a rich cultural life and strong family ties -- has become part of my life.

And so I will share with you these photos. For those of you from other cultures,  this engagement ceremony may seem unusual because it is not a private moment between  two people exchanging a ring; it is a family ceremony, in which the man's family arrives at the house of the prospective fiancee bearing gifts, delivered on an uneven number of trays. In return, they too are given gifts.

These presents can include things like fruit and chocolates, flowers and items of clothing.

The bride price and the length of the engagement are discussed, the date of the wedding is agreed upon. (Nowadays the prospective bride and groom have doubtless settled this first with each other beforehand!) This coming wedding will also mean the union of different Malay cultures, (our family follows the matriarchal adat berpatih customs), so some attention was given to this as well today.

After all is agreed upon, the engagement ring is placed on the woman's hand, not by her prospective husband, but by one of his married female relatives, in this case, his mother.

In fact, at another family engagement some years ago, I was the one to slip an engagement ring onto the hand of another woman. Traditionally, the respective bridegroom does not attend! 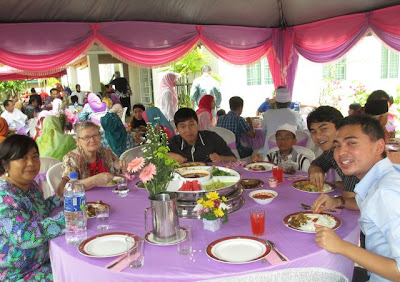 Of course, this being Malaysia, food plays an important role, and everyone goes home well fed.
Posted by Glenda Larke at 10:06 pm 4 comments:

If there is one writing "fact" that comes up again and again on blogs on writing and in writing groups and writing courses, it is this:

Don't head-hop in a single scene.

Or to put the matter another way: stay with your point-of-view (PoV) character. Get inside their skull and stay there. See and hear and experience everything through their eyes and ears and thoughts.

Reasons to maintain a single PoV:

If you head-hop, intimacy is lost. Besides, it confuses the reader about who is thinking what, or who knows what. It can bewilder as well as annoy, because you often end up with an omniscient PoV, the author as god, inserting themselves into the story too much.

Take a scene like this: Character A walks into a room full of men, men experienced in her chosen career. She's a novice photographer in a strange country at war. You are inside her head, experiencing her bravado, her nervousness. Then without warning you are in Character B's (macho male) head, looking at her and assessing her and wondering how long she'll last. Then the omniscient author tells you a bit about Character B, things Character A couldn't possibly know. Then you're inside Character C, proprietary male half in love with her who brought her there, and who is now worrying that was a mistake. Then you are back with character A and her embarrassment when she tries to deal with all the things going on. All in the space of a page, and the head-hopping continues..

Poor writing, right? Hmm. One would think so, and yet...

What prompted me into wondering about this is the book I am reading at the moment: Tatjana Soli's bestselling debut novel, The Lotus Eaters, winner of the James Tait Black Prize for 2010,  and a New York Times Notable Book for 2010. It was also a finalist for the LA Times Book Award. It had good reviews from top review sites. Over on Goodreads it has a huge number of ratings with 66% giving it either 4 or 5 stars, and only 7% giving it 1 or 2 stars. And Goodread readers are much harder in their ratings than, say, Amazon.

Must be a good book that really resonated with readers, right?

I'm about halfway through and I will definitely read it to the end. It's a page turner, a poignant realistic love story, yet a book that deals with some really heavy issues. There are some heart-rendingly beautiful passages.

And the author head-hops all the time in a single scene. Which does annoy me. But I am wondering why it annoys me. Is it simply because I've been told so many times that it is bad writing? If I hadn't been told, would I have even noticed? Or would I just caught up in the story?

Is head-hopping really so bad -- or is it just another way of writing which, in the hands of a skilled narrator, becomes an asset?

Email ThisBlogThis!Share to TwitterShare to FacebookShare to Pinterest
Labels: Point of view 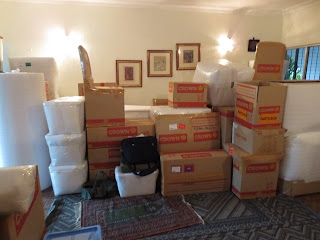 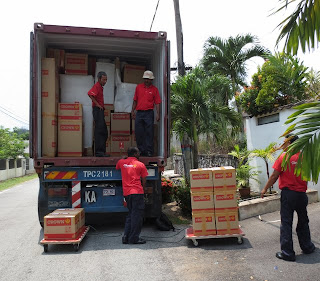 Why do you re-read a book?

I've been thinking about this a lot lately. Partly because I am packing up my gigantic collection of  books, trying to decide which ones to keep and which ones to give away or discard. I am shifting continents and I do have to make decisions based on cost–effectiveness. Do I want to take up so much of a container with reading matter I may never look at again?

It's been a very hard task. Sometimes the criteria is clear; if I am going to use a non-fiction book as a reference, then I keep it. With fiction, it's often less clear-cut. A much-loved book seems to cling to me. How can I throw away something that has given me several hours of pleasure?

I wonder what makes a reader decide a book is worth re-reading.

Sometimes I make the decision based on how much of it I can remember. This is particularly true of the early books of the series. If Book 2 of a trilogy is a long time appearing, I might reread Book 1 again. With G. R. R. Martin's Song of Fire and Ice, I continue to buy the books -- but I've actually stopped reading them. When the last book is due out, I shall reread the early books from the beginning and so on until the last volume.

One of the criteria which I use to help me make the decision about whether I want to keep a book is  indeed whether I will  ever read it again. If it's likely that I will once again dip into it, then it's a keeper. The only trouble is: which will I reread? There are books I want to reread simply for the pleasure. I just can't  quite work out just what their commonality is. Why this one, and not that one -- when I enjoyed them both? When the book has a surprise ending, is it worth revisiting? Will it be fun to see all the clues that I missed first time around? Or will the plot disappoint because I now know the ending? Why have I re-read Georgette Heyer's complete oeuvre multiple times when I don't normally even read romance??

I have republished Havenstar as an e-book and I'm astonished by the number of people who have bought it even though they have read the paperback version, and may in fact still have the paperback. So many of them comment that Havenstar is a book they read and reread, sometimes on a yearly basis.

My wildlife adventure of the day 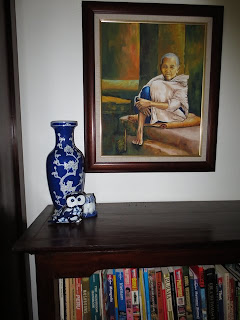 And where's the wildlife, you may ask? Well, it was in that vase. I disturbed it and it fled out the sliding doors... 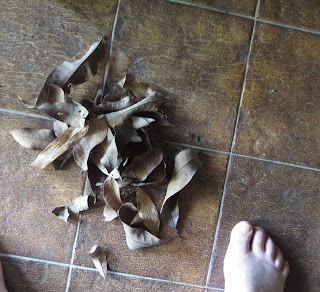 Yep, that pesky tree-shrew (neither shrew nor tree-dweller, remember) was at it again, building a nest in the vase. When I emptied the vase on the floor to check if it had babies in there yet, this pile of leaves was the result!

Last week it was tearing around the front lawn pretend-fleeing its amorous mate. This week, it's in my lounge room. Typical!
Posted by Glenda Larke at 3:50 pm 1 comment: