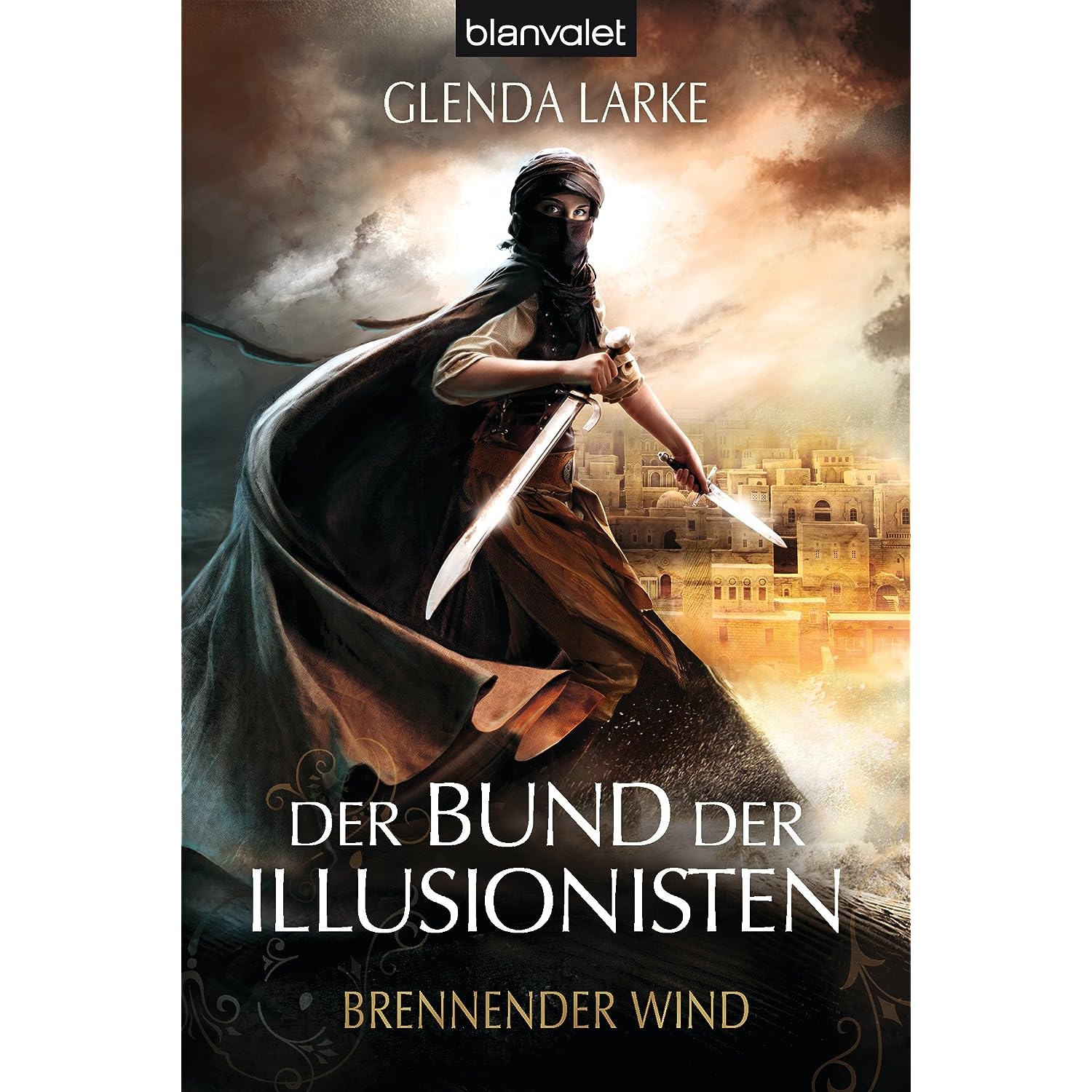 This is the third and final book of the German translation of the Mirage Makers, Der Bund der Illustionisten. It is a gorgeous lush cover, worth clicking on to have a look at in big size.

The German title for Song of the Shiver Barrens is Brennender Wind, or Burning Wind. Unfortunately, it won't be out until July ... even the second book, Trügerisches Licht (Deceptive Light) isn't out until February. Nice to see they are both already selling well in advance on Amazon.de
Posted by Glenda Larke at 10:23 am 4 comments:

These awards are the yearly Australian awards for science fiction, fantasy and horror short stories and novels. Every year, a dedicated band of folk interested in spec-fic of all kinds gets together to organise the awards, a task which includes selecting panels of judges to read works entered in the various categories, finding sponsors for the event, ordering the trophies, organising the actual prize giving ceremony, etc, etc. You can see the website here.

The most impressive thing about this is that they are all volunteers. All of them. And when you consider that anyone can enter their work, and that it will be read and considered, their achievement is truly impressive.

I don't have entry this year, because I haven't published anything this year, which is one reason I am writing this -- no one can accuse me of smarming up the judges, right? I just want to say that I think everyone who devotes time to this in the interests of Australian spec-fic is, in my book, pretty damn special. You rock, every single one of you.

The Next Big Thing

Last week, Rowena Cory Daniells tagged me to write a post about my "next big thing" by answering a number of questions.

Which presented me with a problem: I certainly have a next big thing coming -- my next trilogy, but I don't really want to talk about it, other than saying the first book, The Lascar's Dagger, is finished and the second book is started ... But to be published by whom, and to be out when, is not settled yet. Let's just say, discussions are ongoing.

So I am going to talk about my immediate thing, which for you may be BIG or not -- depending on whether you have read Havenstar, or not. So here goes. 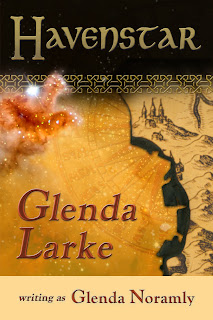 1) What's the name of your Next Big Thing?

Well, it's actually an old thing big thing. A stand-alone fantasy, Havenstar, that was first published in 1999 in the UK under the name of Glenda Noramly, and which was soon out of print because the Virgin sf/f imprint folded. (Yes, that Virgin. You didn't know they published books, did you?) Havenstar was also published in German and Russian.

As a very new author at the time, I found it hard to figure why a book should wend itself up to 81 on the general Amazon best seller list (of all book types) only to be out of print the very next day...  Talk about from supreme happiness to despair in 24 hours! (I know better now -- weird stuff happens all the time in the world of publishing!)


2) Where did the idea come from for the book? 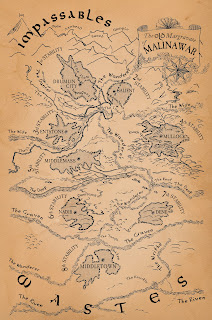 Long before the days of GPS or Harry Potter, I had a conversation about how cool it'd be if you could look at a map in the car and see what was happening on the ground in real time -- and dodge traffic jams, accidents etc. And my niece, the same one who did this map for Havenstar, said, "That's an idea for a book..."  Which is kinda like waving a sardine under the nose of a starving cat...


3) What actors would you choose to play the part of your characters in a movie rendition?

I wouldn't. I think the great glory of reading a book instead of seeing a film is to imagine everything yourself. So go read Havenstar and imagine!

4) What is the one-sentence synopsis of your book?

I am self-publishing it as an eBook. With help from my friends (thanks Patty and Rowena for advice, Jo for helping with the copy editing after I made a mess of it, Perdy for art work and gorgeous map) of which you can see a clearer version here.

6) When will your book be available?

It is available already. You can buy it at here at Smashwords. Just scroll down and click on the title, pay and download it straight onto your Kindle, Nook, Kobo, Sony reader, iPad, iBook and just about any app you care to name! It's also already up for sale on the Kobo site and will eventually turn up on Barnes and Noble sites too. I am in the process of putting it up on Amazon as well, but it will take a few more days for it to go live.


You can also buy a paperback version for $US486, brand new on Amazon.com (or so they say!) ...but believe me, I won't see a cent of that, and I'm not sure you'll ever see a brand new book either, seeing as it has never been reprinted.  (Prices have been crazy for Havenstar ever since it became unavailable.)

7) Who or what inspired you to write this book?

I don't need specific inspiration to write a book! I was born wanting to write books...

8) What else about the book might pique the reader’s interest?

It's a book for those who love traditional fabulist stories -- it has all the tropes of the very best fantasy: a fellowship of unlikely companions, going on a journey, a land under extreme threat, a Dark Lord and his minions, adventure, tormented heroes, unlikely heroines, adventure, battles and unexpected twists and turns. And a love story, of course. And no, even though it has all those things, it's not at all like Lord of Rings.

I guess the other intriguing thing about it  is how many people have told me they have re-read it multiple times.

So that's my big thing.
Now I am supposed to tag 5 more authors for their big thing. Trouble is, everyone I asked was already tagged or not interested. I even put out a general call and got nothing.
I think this meme has chugged to its natural close... 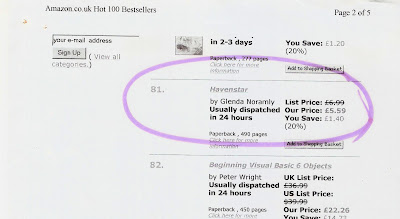 And here for your amusement (its preservation showing just how obsessed I was with ratings at the time) is Havenstar at 81 on Amazon's bestseller list, beating Visual Basic 6 Objects by Peter Wright...
Tom Clancy was at No 78 and 79, while Sword of Honour by Alexander Kent came in at No 80...

(I wonder if it was possible to take screenshots back then? I just printed it off...ah, how things have changed!)


Dave Freer is doing a Next Big Thing today -- read it here. Being written by Dave, it's witty.

More importantly, Dave's Last Big Thing, Steam Mole, has now been freed into the world. If you have a Young Adult reader anywhere within your range, buy it for them, and if you haven't already done so, buy the book comes before it too, Cuttlefish. 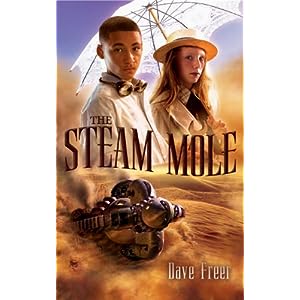 Here's what I wrote about The Steam Mole:

"The Steam Mole by Dave Freer is a gritty tale of betrayal, courage and mateship, a riveting read for lovers of realistic steam-punk. A steam mole may burrow like a termite to escape the harsh conditions, but moral and ethical dilemmas are not so easily solved in Freer’s alternate Australia.

"The background of a hot, climate-damaged land is fascinating, but it’s the eclectic mix of characters that brings the story alive. British imperialists and greed-driven company men vie with fiercely independent miners and submariners. Feisty teenage protagonists include a conflicted aboriginal and the well-to-do daughter of a prominent family, plus Clara and Tim from Cuttlefish. The result is a high-stakes adventure to preserve basic human freedoms."
Posted by Glenda Larke at 10:29 am No comments:

There is a blog thing going around at the moment entitled "The Next Best Thing" where writers write about what they are working on... They answer a number of set questions, then name 5 more writers who will do the same one week later on their own blog site.

Here is Rowena Cory Daniells' blog post, and she has tagged me for next Wednesday -- so if you want to read what I say to say about my next big thing, drop around here next Wednesday.

My problem with this meme is that I can't find anyone who wants to be tagged! Everyone has either already done it, or says they're already committed. (As the meme grows larger week by week, this is not surprising. ) So if you are a published writer and want to write about your next big thing, email me (info at glendalarke dot com) and I'll tag you for the following week...

And Rowena writes great character-based epic fantasy so pop over to her blog and take a look around.
Posted by Glenda Larke at 11:47 am 1 comment:

We have two rambutan trees in our backyard. They fruit every year, and I think this is the best year ever... 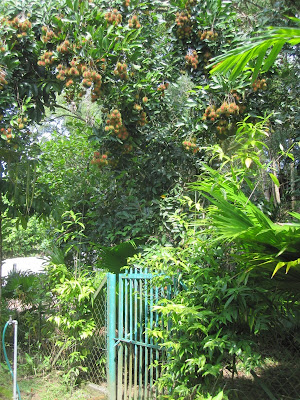 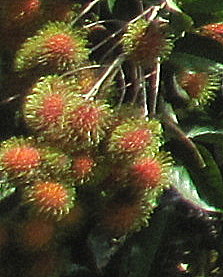 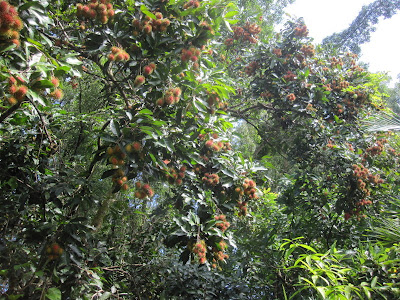 Photo essay of a day or two on the streets of Penang...

I spent a couple of wonderful days up on Penang Island with friends, staying at the gorgeous intimate Hotel Penaga, attending the Georgetown Literary Festival. Stimulating, interesting festival, good company, fantastic food and, well...Penang.
What can you say about Penang? History writ large in every street, in its graveyards and its buildings and its port. Yes, there are signs that the history and the culture is being superseded in places by the  replacement plastic global franchise we recognise from Europe to New Zealand and everywhere in between, but somehow, Penang retains a firm hold on the past as the foundation of what is still real and authentic today.

That, Hey, we're not here for tourists. This is the way we live, and we happen to like it like this, thank you very much.
Part of Penang is a UN World Heritage Site. 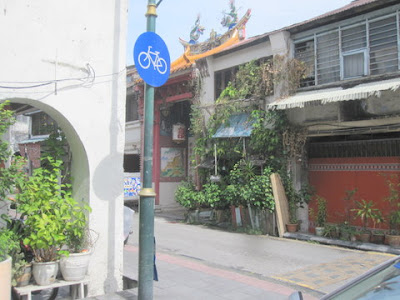 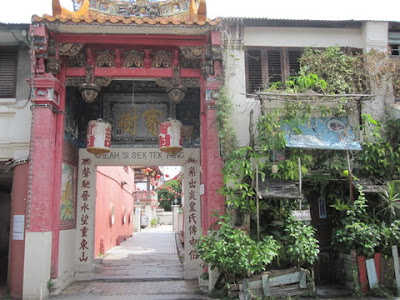 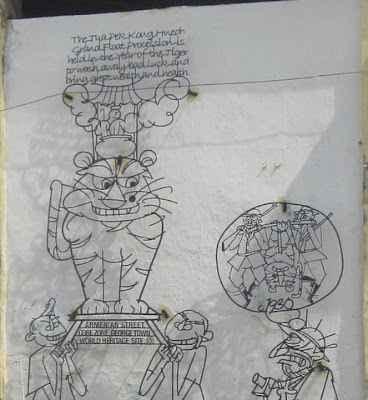 The inscription on the graffiti reads:
The Tua Pek Kong Hueoh Grand Float Procession is held in the Year of the Tiger to wash away bad luck and bring great wealth and health. 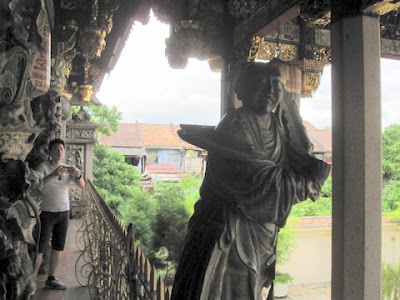