What I've been up to lately...

The nest was really blown around in the wind during a thunderstorm yesterday - our trip switch was tripped twice by lightning in the space of an hour! - but the bird remains quite snug in its leafy cover.

In other news: husband returned from a weeklong trip to Christchurch New Zealand, escaping the earthquake by two days.

I have been doing the proofs for the Voyager first pages of Stormlord's Exile.

I had a pair of resident Oriental Honey Buzzards calling for almost half an hour as they circled the house. Possibly, they are nesting in the golf course that is not far over our back fence. And a cuckoo was going berserk in the garden this morning, so some of the small passerines should be watchful when they come to nest... Not absolutely sure what species the cuckoo was, but I think it might possibly be the Banded Bay. I have heard the Plaintive Cuckoo in our garden, but not for a long time.

Oh, and I saw a male Orange-headed Thrush up at Fraser's Hill, which was a nice sighting. Very attractive migrant.

And that's about it. Nothing really exciting. Sometimes life is best with the small pleasures and an absence of excitement and adventure.
Posted by Glenda Larke at 7:00 pm 3 comments:

Take a look at my last blogpost first, if you haven't seen it.

I have two species of tailorbirds that nest in my garden. The fleeting glimpses I've caught of the owners of this one indicate it is the Common Tailorbird, sometimes called the Long-tailed. The other species is the Ashy.

I took these pictures at dusk - I waited to make sure the builders had gone for the night, as I didn't want them to abandon the nest because I was too close.


The bird works mostly from the interior, poking a hole and then threading the fluffy stuff through to the outside. On the outside, it fluffs it out still more so that it won't pull back through, and the stitch is done. The leaves are still on the plant, still growing - the perfect camouflage, one hopes...
Posted by Glenda Larke at 7:17 am 3 comments:

Help, one week since I blogged. I am neglecting this lately...just two many other things going on in my life which are simply too dull to mention!!

Well except this. Now this is cool:


This is the front of our house, looking from the front lawn at the front door.
Note the red X in the middle. 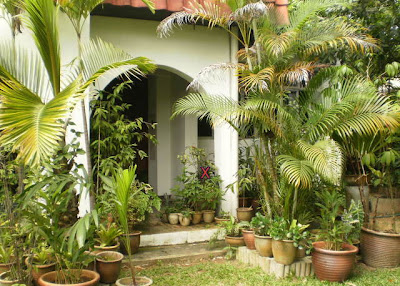 Behind that X there is a pair of tailorbirds industriously building a nest - tailoring it, in fact, using their own brand of thread. More photos will follow, but for now, I don't want to disturb them. 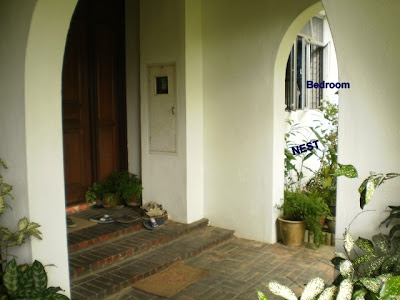 Here's another photo showing the front door to the left. The nest is inside that big leaf directly to the left of the 'N' in NEST. These birds are tiny...less than 12 cm/5" from the tip of their beaks to the tip of their rather long tails. Their bodies are half that! They could sit on your finger and you wouldn't even feel the weight.
Posted by Glenda Larke at 4:52 pm 2 comments:

My husband and I were swapping stories in the car...harking back to our primary school days.

I lived on a farm and we had our own dairy cow, so if there was one thing I had plenty of when growing up, it was fresh unpasturised milk and cream and fresh home-made butter. Yet when I got to school, we were given one third of a bottle of milk to drink under some government scheme or another. I loved my milk cold and with the full cream skimmed off the top. At school it was pasturised, disgustingly warm (having been transported in crates on the open back of a truck), and topped with a glob of cream in the neck of the bottle. I loathed it, but refusing to drink it was not an option.

Post World War Two, after the defeat of the Japanese in Malaya, the returning British* were understandably concerned about the nutrition of the half-starved population, especially its children. So twice a week each child had to bring from home a cigarette tin, which would then be filled with powdered Klim Milk to take home.**

Anyway, boys will be boys, and those kids at the Bukit Beringin school in Malacca (hardly more than an open platform of cement with an terracotta tiled roof at the time) were no angels. On the way home from school, husband used to put a whole lot of powdered milk in his mouth to blow at his pals when they weren't expecting it.

If he needed school supplies - a new pencil, for example - he'd take an egg from the henhouse on the way to school slip it into his pocket, and swop it for what he wanted at the shop along the way. Of course, if there was a bit if roughhousing on the way to school with his friends, you can imagine what happened to the egg. And he had to sit all day with that mess congealing in his shorts...

Ok, so husband has the best "when I was a kid" stories...

*I've never quite understood why they thought they had the right to return after failing to protect the country from invasion.
**I wonder what I would have thought of that at the time had I known...I don't think I'd ever seen powdered milk, or knew it existed.
Posted by Glenda Larke at 9:56 pm 4 comments: 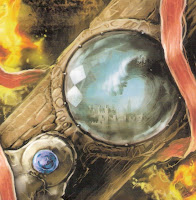 Very occasionally, when I say I write fantasy, the listener imagines I write sex fantasies. I won’t go there, except to say I haven’t worked out a really good reply to that one yet.
Occasionally I get someone saying, ‘Oh, I’m afraid I don’t read science fiction. I like my books to be real.’ Or something along those lines. They don’t mean non-fiction, though; they mean books set in our time and place, or at least in known history of this world. Usually I don’t say much, but I could point out that fiction is…well, fictional. It’s not real, folks.
Often I have the person say, ‘Oh you mean things like Harry Potter?’
My reply, ‘Yeah, Harry Potter without the money.’

Best of all is when someone replies, ‘Oh, do you? I love fantasy! What name do you write under?’
For them, fantasy works. They like to read it. Ask them why, and you get a whole slew of answers from different people that seem at first to have little in common. But I believe they mostly can be condensed down to two reasons.
Firstly, many of us live in a world where we are relatively powerless. We look around and wonder what we can do to stop global warming, and our own government won’t sign the Kyoto Protocol. We don’t throw our rubbish on the footpaths, but we have to wade through other people’s litter. We pay our taxes and take pride in the things it buys for our citizens – schools, hospitals, health care – but the mega rich squirrel away their money in dodgy tax havens and claim their fancy cars as business expenses. We teach science, and the teacher in the next classroom is busy telling her students there’s no such thing as evolution.
Most of us are just small people in a big world, wondering if we’ll ever make an impact on things that really matter.
But when we read, we can fulfill our dreams. We can identify with the little guy who does great things. For a moment, we can be the Hobbit doing huge deeds, or the citizenless girl living feral in a cemetery who grows up to be Blaze Halfbreed, making a difference to a whole archipelago of islands.
In fantasy terrible things can happen, but because they happen in a world that doesn’t exist anywhere except on the printed page, we aren’t traumatised by them. Read a book like “Room” – brilliant literary fiction about a boy born and brought up in the tiny room where his mother is imprisoned as a sex slave – and we can come away feeling distressed because we know it happens. In our world. Now. 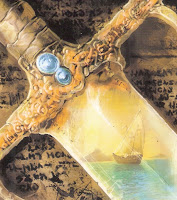 In fantasy we can make it all come good in the end if we want. In the real world, we don’t have that choice.
The second reason is that reading fantasy stretches our imaginations. There’s a “wow” factor. You never know what’s around the next corner. The sensawunda. The fabulous, the weird, the wondrous. You can get this in today’s fiction-set-in-this-world too, but there are always limits before it slips across into fantasy or paranormal or science fiction. But in fantasy, a good writer can convince you – for a while – that their world is viable, and take you along for the ride of a lifetime.
To me, those two reasons encapsulate why we read fantasy.
What do you think?
;
Pics from my foreign language editions.
Posted by Glenda Larke at 10:17 pm 12 comments:

...I am over here, at Mary Victoria's blog, for the celebration of Sahima's Song, the second book in her trilogy, and I'm writing about strong women in fiction.
Posted by Glenda Larke at 7:20 pm No comments:

...is a N.Z. writer I met in September at Worldcon. This month she has Book 2 coming out in her trilogy: " Chronicles of the Tree."

I just LOVE the setting of these books. At one stage in the far distance past, I did briefly consider  writing a book about everyone living in trees, and gave up on the idea because...well, because I'm not half as ingenious as Mary! She took the idea of just one tree, and made it into a believable, wondrous world, peopled with interesting characters with interesting problems.

So this month she is celebrating strong women in books over at her website. Pop over there from time to time and click on "Journal" to see what Mary and another bunch of writers have to say about the subject. Nicole Murphy is the first.
Posted by Glenda Larke at 9:38 pm 1 comment: